National Restaurant of the Year 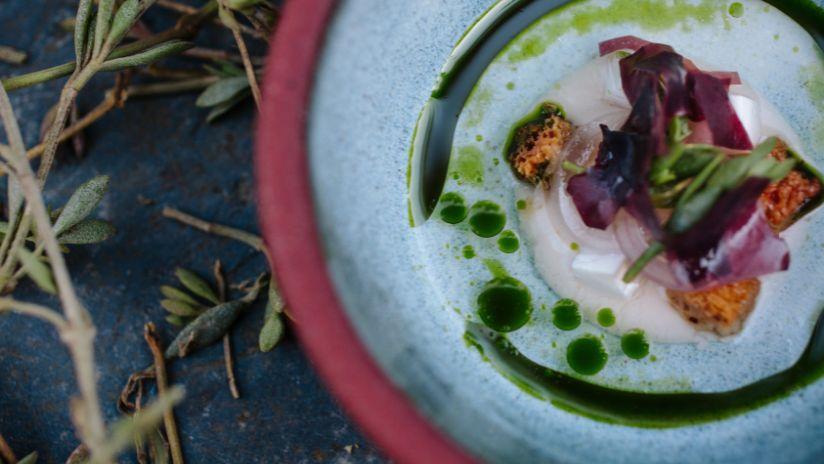 Surrounded by rhododendron bushes and undulating yet carefully trimmed lawns, Ynyshir looks like a typical country house hotel. But all is not quite as it seems at this remote property, located just south of Snowdonia National Park on the western edge of mid Wales.

Those that venture inside will find a massive chef cooking a multi-course tasting menu of uncompromisingly edgy, Asian-influenced food. That chef is Gareth Ward, a protégé of the Nottinghamshire-based Sat Bains.

Run by Ward’s partner Amelia Eriksson, the small dining room is stripped back and a little Scandi in feel with a fully-open kitchen where diners can watch the casually clad brigade at work (Ward often rocks a pair of denim cut-offs).

The food itself is described as ‘ingredient led, flavour driven, fat fuelled and meat obsessed’. This is an entirely accurate description, but one that doesn’t quite do justice to Ward’s explosive cooking. His approach is strikingly different to the norm – a peculiar but effective marriage of top-quality produce, Asian flavours and unusual technique served in a succession of tiny bites.

There are a number of ways to experience Ynyshir, either in the dining room or in its concrete-topped counter dining experience Ffwrnais Kitchen. Named after the village and the furnace that once produced the area’s electricity, and smelted iron ore, diners have two chefs looking after them who will talk them through each dish and let them touch the ingredients. There’s also the more intimate Pass Bench for two people in the centre of the kitchen where you get to chat to Ward himself as he works his magic.